Tenga Onigawara (鬼瓦天牙, Onigawara Tenga) is the banchou of Salt Middle School and an unofficial member of the Body Improvement Club.

Onigawara's most striking traits are his slick pompadour and heavy bags under his eyes. He wears the typical dark blue Salt Middle School uniform with baggy pants and a pink T-shirt underneath. He is sometimes seen with a bandage on his right cheek. He generally has the appearance of a stereotypical Japanese delinquent. 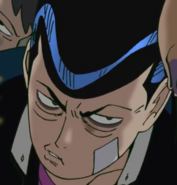 Full view of Onigawara
Add a photo to this gallery

Onigawara acts like a stereotypical delinquent, being quick to anger and mainly using violence to resolve conflicts. He is quite prideful and cares a lot about his reputation, trying to come off as cool and threatening as possible. He is not above using others to obtain what he wants. However, he has a secret soft side and is really a good kid deep down. Despite acting like a delinquent, Onigawara does not smoke and once had a perfect class attendance record for two consecutive years. He also is not perverted at all, and secretly dreams of being a mangaka, something he is embarrassed of.

Back in kindergarten, a girl called Mariko would say she always wanted to marry him.[2]

Onigawara defeated the banchou of Black Vinegar Mid before being beaten by their urabanchou Teruki Hanazawa. Wanting revenge, he got the Body Improvement Club involved by tricking Mob into getting kidnapped by Black Vinegar. After Mob's destruction of Black Vinegar Mid's school, Onigawara inadvertently started the rumour of "White T-Poison".

Later, after being taken on a run and challenged to better himself by Musashi Goda, Onigawara came to school to find himself wrongly accused by Shinji Kamuro of stealing his female classmates' flutes, which led to him being labeled a pervert. Due to the event causing him to be isolated from everyone else, Musashi tried to cheer him up by helping him to find his path.

After the Scar incident, Tenga soon revealed that everyone knew that he wasn't a pervert, but they merely wanted an excuse to isolate him. The event made him realize what kind of person he was before he decided to join the Body Improvement Club in an effort to better himself.

Along with the Body Improvement Club, he fought Shibata but was easily defeated.

Onigawara is relatively strong and is good at hand-to-hand fighting, capable of beating up a group of Black Vinegar Middle School students with relative ease, at least until the powerful esper Teru showed up. Like most normal people, he is helpless against psychic powers. He has since joined the Body Improvement Club, and while he himself has a hard time keeping up, he is still much closer to them than Mob is.

Retrieved from "https://mob-psycho-100.fandom.com/wiki/Tenga_Onigawara?oldid=16938"
Community content is available under CC-BY-SA unless otherwise noted.